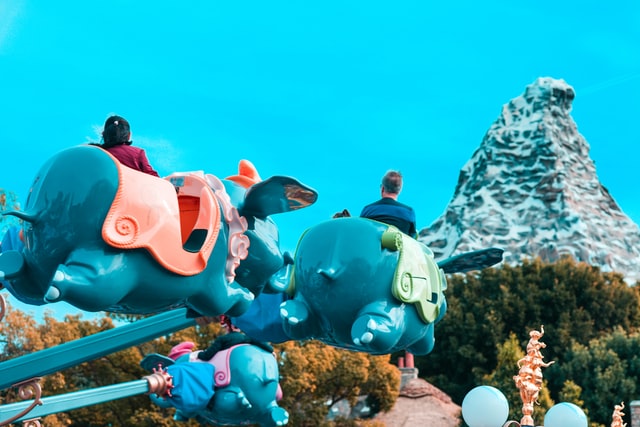 Have you ever daydreamed about your perfect Disney day? During a recent brush with insomnia, I watched a late-night movie that was followed by a random episode of that old show, Wife Swap. I didn't stay to watch it, but as I tossed and turned in bed, it prompted me to start thinking about swapping attractions in the Disney parks and what could/should go where to create my own personal perfect park.

Naturally, I started with the footprint of Disneyland being my 'home' park. The entryway is timeless, and I wouldn't dare mess with that, but there are a few things that I would tweak given the perfect, creative opportunity.

Next up, we have Pirates of the Caribbean and New Orleans Square. Before you get all worked up, I wouldn't dream of changing a thing here. In fact, everything can stay put all the way around into Critter Country except for The Many Adventures of Winnie the Pooh, which would be better served as Pooh's Honey Hunt from Tokyo Disneyland.

Tom Sawyer Island will take on an entirely new role serving as the home for a miniature version of Pandora - World of Avatar. As soon as your cross over the water, you're transported into another world, complete with all of the bioluminescence you can handle. And, of course, it wouldn't be complete without its own Flight of Passage attraction.

Let's skirt around the edge of the Rivers of America and head on into Frontierland, where we will be swapping out Big Thunder Mountain Railroad for the Walt Disney World version; I don't know why I just like that one better. Rancho del Zocalo Restaurant and the Frontierland Shootin' Exposition are both coming out. In will go an EPCOT-style World Showcase food hall with quick service options similar to those you would find in the countries around World Showcase Lagoon.

On to Fantasyland! Let's add a princess-themed character dining option similar to Cinderella's Royal Table or Be Our Guest in the area around and behind the Royal Hall, to the left of the castle. Venturing through Sleeping Beauty Castle, make sure you are sitting down because I am going to make some waves with this next move. Peter Pan's Flight is going to expand into the area occupied by Mr. Toad's Wild Ride. Yep, that's right. I'm getting rid of the (literal) simulated hell and all the weirdness representing the otherwise beautiful stories of the Wind in the Willows. Peter Pan's Flight can now have a more elaborate queuing area, along with longer ride time and Fast Pass line.

If you thought that one was troublesome, next up, Pinocchio's Daring Journey is on the way out as well, replaced with a version of the new Ratatouille ride that is soon to open in EPCOT, originally in Disneyland Paris.

Next on the chopping block is Mickey's Toontown. Even when my children were younger, we didn't spend a lot of time here, and since they are older now, I'm going to trade it out in this fantasy version of Disneyland for something a little more exotic. Move over Roger Rabbit; this area will be used for an abridged version of Animal Kingdom with Kilimanjaro Safaris, Expedition Everest, and a few great places to get something more substantial to eat. The Fantasyland Theatre will provide ample space for a production of The Lion King or a similar stage attraction, setting the scene at the newly themed area entrance.

Rounding the Matterhorn, we step into Tomorrowland from the back entrance, with the first change being a revamp of Nemo's Submarines into the Tokyo DisneySea attraction, 20,000 Leagues Under the Sea. Autopia will morph into a brand-new and improved version of Test Track from EPCOT's Future World. Brace yourselves though, here comes another big one. The Star Wars Launch Bay? We will turn that into another Tokyo Disney Sea attraction: Journey to the Center of the Earth. Sure, it doesn't entirely fit the Tomorrowland theme but, this is my fantasy park so, tough luck.

We are going to end this controversial reshuffling of Disney attractions with the relocation of Star Tours. I'm sure you can guess where it will go: somewhere back in Star Wars: Galaxy's Edge. What will be installed in its place? Mission Space.

You might be wondering why I have left out some of the best attractions found in California Adventure. As it is just across the walkway, I tend to include them in my mind as one location and prefer to leave that the way it is, for this week anyway.

Now I am throwing it over to you; what would you place where? What would stay and what would go? If you have been to other Disney parks around the world, what would you bring to your home park?

I can't wait to read your ideas.