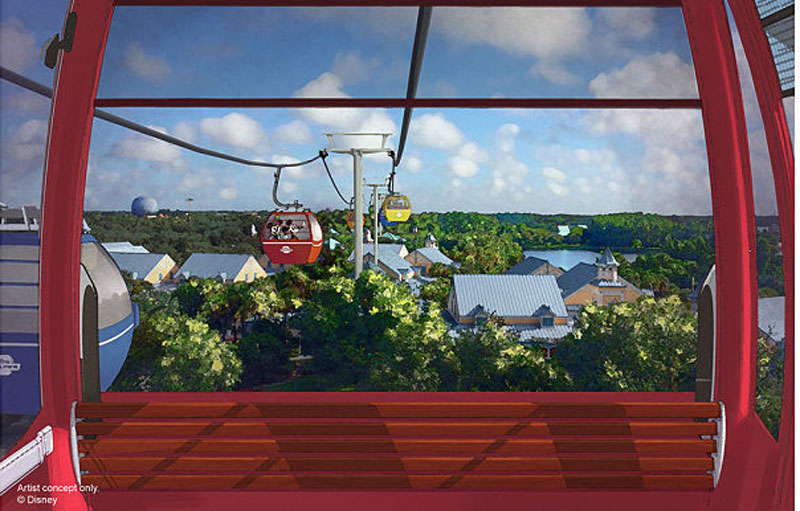 Welcome to another edition of Disney Rumor Round Up! You can check out the July Pre-D23 installment here. This installment will cover several of the rumors discussed before D23 and what rumors still remain.

Disney officially announced the Tron Lightcycle coaster from Disneyland Shanghai. The coaster will go next to Space Mountain and behind the Tomorrowland Speedway. Some rumors before D23 suggested that the speedway would close to make room, but that is not the case according to the concept art. According to sources on WDWMagic, the Tomorrowland Speedway will get an update to look more fitting next to Tron. Both the Speedway update and Tron are supposed to be completed in time for the Walt Disney World 50th anniversary in 2021.

CarouselOf on Twitter and Jim Hill are reporting that the final scene of Carousel of Progress will get a redo in time for the 50th anniversary as well.

One piece we did not hear about at D23 is the fate of Stitch’s Great Escape. Rumors surrounding this attraction have died down but still suggest a replacement will happen in time for the major anniversary year of 2021.

The final piece we did hear about before D23 was the new Magic Kingdom theater. This theater will go near the Main Street bypass in what is currently Cast Member parking and is expected to be similar the Hyperion Theater out in Disney California Adventure. Epcot saw huge news out of D23. Starting in World Showcase, Disney first announced Ratatouille for the France pavilion, which would go behind the existing pavilion in an expansion. The China pavilion is also getting updates in a new seamless circle vision film. Ratatouille is said to open in 2020, according to WDWMagic sources. Ratatouille began construction on September 20th, 2017.

Two big rumors talked about that Disney did not announce were a Brazil pavilion and a new attraction in the U.K. pavilion. Multiple sources indicate that both are still coming and will be announced as part of the ongoing Epcot redo. The U.K. pavilion is said to get that new attraction in time for the 50th anniversary, according to WDWMagic sources. Those sources have also said the ride will be centered around a Disney intellectual property, and that it is not Mary Poppins.

Moving over to Future World, Disney announced the long rumored and anticipated Guardians of the Galaxy attraction. This attraction will take over Universe of Energy, which closed on August 13th, 2017. An expansion will be built onto the existing building for what is said to be a roller coaster. According to WDWMagic sources, the Guardians attraction will open in spring 2021. Land clearing around the Universe of Energy building has already begun according to Blog Mickey.

Mission: Space updates were also announced and have since opened to give guests a fresh look at the attraction. Finally, Disney gave us a glimpse into the future of Future World. Bob Chapek, Chairman of Parks and Resorts and Imagineer Tom Fitzgerald made a key to not use the name Future World in this presentation. Disney also showed us an image of Epcot where the entire front of the park was changed. Innoventions and other structures would be demolished and new futuristic areas with lots of greenery would be put in place. Chapek made a point to say at D23 that this is just the beginning of changes at Epcot in both World Showcase and Future World. Both Tom and Bob emphasized Epcot becoming more Disney, more relevant, and more timeless.

According to current rumors from WDWMagic, plans for the front of the park have not been finalized but it will see significant changes. It is possible one side of Innoventions will stay while the other will be demolished. These plans go much further than the Walt Disney World 50th anniversary and look more towards the Epcot 40th in 2022, and even beyond that. Disney gave us our first real look at what Star Wars land will look like. They also gave us a name for this 14 acre land. Star Wars: Galaxy’s Edge will officially open at Disneyland first in 2019 and then later in that same year for Hollywood Studios. In addition, Disney announced Toy Story Land will open the summer of 2018. We should expect the opening to be similar to Pandora, being around Memorial Day weekend.

Finally, the closure of the Great Movie Ride was announced to make way for Mickey and Minnie’s Runaway railway. A new attraction uses 2 and 1/2 D technology that puts you inside a Mickey short film. This attraction is set to open in fall 2019 according to WDWMagic sources, with permit filings under the name Project Marceline. Sources also indicate this ride will make use of the trackless ride technology in ways not seen before.

Animal Kingdom received no love at D23 other than some mentions about the incredible Pandora expansion that just opened. One rumor on WDWMagic indicates Indiana Jones is being looked at for Animal Kingdom by Disney executives. Animal Kingdom lead Imagineer Joe Rohde and park Vice President Djuan Rivers recently visited Bali together. While no rumors directly connect this, Joe and Imagineers often take research trips as part of their work for the parks. Disney officially announced the gondola project playing on Skyway nostalgia, calling it the Disney Skyliner. The Skyliner will feature some of your favorite characters on them and make stops at Hollywood Studios, Epcot, Disney’s Riviera Resort, Caribbean Beach, and Art of Animation/Pop Century. The Skyliner is expected to have room for 8-10 people in each car. Work has commenced on the gondola stations and is expected to open in 2019 in time for Star Wars: Galaxy’s Edge.

Disney’s Riviera Resort was announced as the next Disney Vacation Club property. The resort will be on the grounds of Caribbean Beach but will be its own resort, offering views of theme park fireworks from a rooftop dining venue. This resort was previously rumored but many speculated it would be part of Caribbean Beach and be the first moderate DVC. This was not the case.

Some of the biggest excitement out of D23 was created by Disney announcing plans for a Star Wars resort experience. Not many details were given, but in surveys that Disney sent out this would be a highly immersive environment and every window in the resort would look out into space. No other rumors about what exactly this resort will include are out at this time.

Disneyland got a few announcements from D23 as well. Pixar Fest and Pixar Pier were announced; two things previously not rumored. Paradise Pier will become Pixar Pier permanently in 2018 and Pixar Fest will be a resort wide celebration in 2018 featuring new fireworks at Disneyland along with the Pixar Play Parade moving to Disneyland. Paint the Night will then move to Disney California Adventure, which was previously rumored. Pixar Pier will also welcome a new spinner attraction and a possible dark ride in the long term, according to MiceChat.

Disney didn’t give many details but did say a major Marvel themed area will make its way to California Adventure. They did not say where it would be exactly or when it is expected to be completed but it would have attractions featuring the Avengers and Spider-Man. According to WDWMagic sources, the Marvel land isn’t being rushed like other projects within Disney.

So many new things have been announced for Disney all over the world. We can expect even more rumors and announcements to come in the next few months. Join in the discussion of these news and rumors stories on the Disboards.