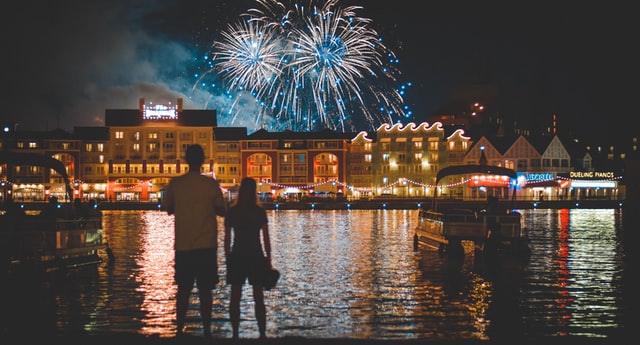 While many of you are saying your final farewells to 2021, those of us a little further around the globe have already crossed over into 2022 with what I can only describe as mixed feelings. This time last year, I was full of hope, convinced that 2021 would bring us better days. Little did I know that the 12 months to come would cut me off from everything I loved. Lucky for me, I’ve had you all to keep me company, maintaining my connection to Disney and everything it stands for in my world. Travel, adventure, experience, and connection. For that, I am genuinely grateful.

As if the months of lockdown in Sydney were not bad enough, my family has ended the year with a funeral, farewelling my grandmother. Some of you might remember her from a few of my earlier articles as she and my grandfather (Nana and Poppy) were responsible for kick-starting my Disney love affair back when I was just a curly-haired, sassy six-year-old. She will be dearly missed but reminds me daily to live for the moment and make my own luck as I navigate through this challenging world. Nana is the Tala to my Moana, leading me through the waves.

With 2022 comes my return to Disney and travel in general. With the Australian borders now open, we have already begun to plan our adventures, including reunification with my second home, Oahu, which means some much-needed time in Aulani. I know many of you are making your way back to the parks in the months ahead. Even though we can look at it as scary or disappointing, focusing on all that is missing, it is also an exciting time to travel, never more aware that we are entitled to nothing; with every day an opportunity.

When reflecting on the year, even though Disney may have made some mistakes in 2021, I can’t help but think, who hasn’t? Like those bangs I cut myself in lockdown, the discontinuation of FastPass+ (only a few months after we discussed it in this article) was met with the resounding recoil of disappointment. There was the temporary suspension of tram services in parking lots. And let’s just say, you can’t put the Genie back in the bottle — though many of us would like to.

Even so, we are in a much better place than we were twelve months ago, having regained many of the perks we missed. More resorts have reopened in 2021, park hopping has made its return, and options for nighttime entertainment have increased along with crowd capacity. While some of you may not like that last one, it also allows more of us to visit the parks, which means it’s a necessary evil in the grand scheme of things. It’s important to keep it all in perspective with how far we have come.

After years of pardoning their pixie dust, Walt Disney World’s parks are reasonably smooth sailing when it comes to being inconvenienced by construction. In what I am sure was part of the plan all along, it seems Imagineers were clearing the decks for the 50th Anniversary, with many of the projects set to launch in 2022 external to the flow of park foot traffic. Except, of course, Epcot, undergoing one of the most significant renovation projects so far, though this is not expected to be completed until at least 2023. But we won’t need to wait that long to enjoy some of the new additions.

Epcot will unveil the highly anticipated Guardians of the Galaxy: Cosmic Rewind attraction in the coming summer, and Animal Kingdom will host the newly revamped Finding Nemo musical. And who knows, maybe we will even get lucky enough to see the TRON Lightcycle Power Run Rollercoaster near completion. Maybe.

Of course, I would be remiss if I didn’t mention the March 1st opening of Star Wars: Galactic Starcruiser; bookings are available now. Sit tight with your strong opinions; we will get into this one a bit more next week when I unpack my feelings on Wednesday.

Disneyland went big in 2021 with the Avengers Campus opening, though the big ’22 is said to see the return of Fantasmic!, World of Color, and the Main Street Electrical Parade, all of which I adore. I secretly think they were waiting for me. 😉

We have been through a lot in this lap around the sun. We watched the magic return to Disneyland together, tackled some giant topics like Disney bullies, and welcomed the 50th Anniversary of Walt Disney World, remembering what built this charming place to begin with. Determination and a dream. All the while watching the challenges of the outside world mount as we face one history-making day after the next. I don’t know about you, but I am grateful for my Disney escape, even from afar.

Before someone pipes up, it isn’t being a ‘Disney Apologist‘ or whatever tired catchphrase has been adapted this week. It’s just a simple appreciation for the opportunity, an understanding that everything comes at a cost, and recognition that it will never be perfect in the frame of mind that each individual wants it to be. Sure, that black or white style of thinking is undoubtedly valid, but the magic is in the grey stuff — get it? — in between.

It’s just about time for me hit the sheets as I sleep a bit further into the morning hours than usual. When I wake, I’ll be seeing in the rest of New Year’s Day catching a few waves down here in the summer heat of Sydney. Are you doing something special to mark the occasion? Let me know your plans below.

There is a stronger sense of uncertainty as I leave you this time around. Not that I feel the world will end up in a worse place in a year, but in that I no longer feel like my path is certain. That’s not necessarily a negative; it means that there is once again a new world of different possibilities out there, and it is up to me to make my own way back to doing what I love.

I hope the days and months to come bring you peace, love, and happiness as we make our way through the twists and turns 2022 has in store for us.

Stay safe, and have a wonderfully happy New Year.