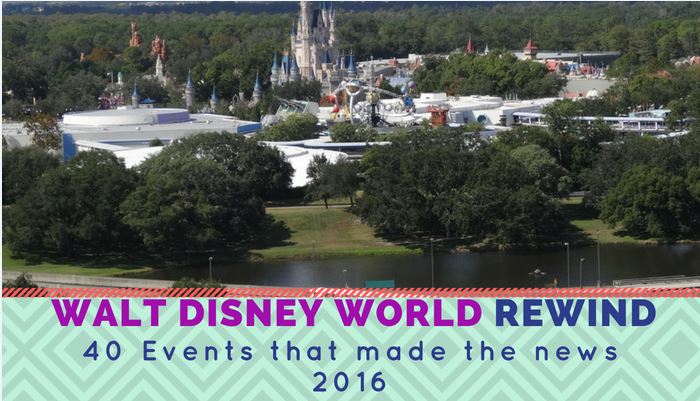 Another year has come and is almost gone. We look back at Walt Disney World to see the anniversaries, openings, closings, new offerings and some still-to-come that shaped 2016.

Osborne Family Spectacle of Dancing Lights – January 6 was the last time this holiday favorite twinkled and danced at Disney’s Hollywood Studios. The millions of lights, which were strung on and across the building facades of the Streets of America, came down to make way for the future Star Wars land. A Disney spokeswoman said they were still working on the details of what to do with the lights. Perhaps they’ll end up at Disney Springs, somewhere back in Hollywood Studios or in another park.

Tiffins Restaurant and Nomad Lounge – Opened in May at Disney’s Animal Kingdom. Disney Springs – Throughout the year Disney Springs slowly unfolded before our eyes. Sections opened up beginning this past spring.

Innoventions East and West – Epcot – In January, many of the attractions in Innoventions East and West were closed including Habit Heroes and VISION House. In September, The Sum of All Thrills and Stormstruck also closed. Disney hasn’t replaced any of these attractions, nor have they made any announcements about the future plans for Innoventions. However, in November, at this year’s Destination D event, Bob Chapek said, “We will be doing some major transformation at Epcot in the future.” He continued to say, “It will be more Disney. It will be even more relevant that it is today … And, at the same time, it will stay true to our original vision. Stay tuned, there’s a lot more to come on Epcot.”

In January, La Nouba by Cirque Du Soleil introduced two new acts – B-Boy and Aerial Bamboo. B-Boy is similar to breakdancing, but incorporates acrobatic tricks, flips and moves. Aerial Bamboo involves one person performing various circus acts while suspended from another person who is attached to a pole-shaped apparatus from the ceiling. Epcot’s Food & Wine Festival – In addition to extending the dates for the Food & Wine Festival, Disney introduced some new additions to the 23rd addition of this annual favorite event. They included two new outdoor kitchens: La Isla Fresca and the Cider House Outdoor Kitchen, the introduction of Huey, Dewey and Louie topiaries into a display entitled “The Victory Garden.” The display also included Donald and Daisy Duck. Lastly, a new children’s area, the Harmony Gardens Musical Playground, made its debut. It featured Disney’s Fab Five and includes interactive drums, chimes and xylophones.

Soarin’ Around The World – In June, after waiting what seemed like forever, Disney fans were treated to an updated film at this popular Epcot attraction. Rivers of Light – No three words in recent Disney history has ever caused Cast Members more anxiety than Rivers. Of. Light. Two years ago, Disney announced this new nighttime show for Animal Kingdom. This, along with a few other new nighttime additions, was aimed to make Animal Kingdom a full day park. The opening date was rumored for April 2016 – it didn’t happen. Then it was rumored for Memorial Day weekend – that didn’t happen. In the meantime, Jungle Book Alive with Magic, a limited engagement interim show opened in May, while Disney continued to work on Rivers of Light.  Then fall came and went with no announcement. In October, Disney announced a Rivers of Light Dining Package starting on May 1, 2017, however that is currently not available for booking. Stay tuned.

Toy Story Mania – A much-needed third track was added in May to this popular attraction at Disney’s Hollywood Studios.

Seasonal Tiered Pricing – In February Walt Disney World (along with Disneyland) introduced seasonal tiered pricing for their one-day park tickets. Ticket prices vary depending on the park, but they are broken down into value, regular and peak periods. Disney After Hours – In March Disney announced this program that would enable guests to experience the Magic Kingdom for three hours after the park close on select dates in April and May. It would include select attractions, meet & greets, shops and dining all for $149.00 per person. The news media and bloggers generally considered it a flop, but Disney has recently announced it’s bringing the program back for select dates in January through March. Tickets are now $119.00 per person.

Changes to FastPass+ – In April the FastPass+ experience got a little more flexible when Disney changed how and when to obtain FP+ reservations. Not only are guests able to choose between one and three initial FastPasses, instead of the mandatory three, they can also make changes and add additional passes through the MyDisneyExperience app instead of a kiosk. Additionally, guests can also remove individuals from a group pass and cancel single passes instead of all of them at once.

Tree of Life Awakenings – This projection show on the front side of the Tree of Life premiered over the Memorial Day Weekend. Epcot’s Disney Vacation Club Lounge – In June, The Imagination Pavilion’s former ImageWorks attraction was given a face-lift and brought back as a comfortable lounge for Disney’s Vacation Club members.  It was recently announced that this will stay open through 2017.

Frozen Ever After –June saw the opening of “Frozen Ever After,” a dark ride that replaced the much mourned Maelstrom attraction in Norway. The audio-animatronics are some of the most technologically advanced to date.

Preferred Parking – In July Disney offered preferred parking to those driving to Walt Disney World. The fee is $15.00 and payable in cash only. Princess Elena of Avalor joins the club –Disney crowned a new princess and their first Latina princess, Elena of Avalor. Her official royal induction ceremony in the court in front of Cinderella’s Castle was in August.

Carousel of Progress – This attraction, which was one of four that premiered at the 1964-65 New York World’s Fair and was one of Walt Disney’s favorite, got a little love in July with new paint on the façade and a new attraction sign.

Tomorrowland Rock work – September saw the finishing touches to the rocks that border the entrance to Tomorrowland in the Magic Kingdom. The terracotta colored rockwork is now a shiny metallic blue, green and silver. The Muppets, the Magic Kingdom and You! – In October Disney introduced a new show, “The Muppets Present Great Moments in American History.” The show takes place in Liberty Square.

Hurricane Matthew visits Walt Disney World – In advance of this category 5 hurricane and out of caution, the Walt Disney World Resort closed its Theme Parks early on Thursday, October 6 and all day on Friday, October 7. They reopened on Saturday. Also closed were the water parks, the ESPN Sports Complex and Disney Springs. Additionally, guests at the Fort Wilderness Campground, the Polynesian Bungalows and the Saratoga Springs Treehouse Villas were evacuated and relocated to other Disney Resorts.

Main Street Electrical Parade – October saw the last performance of this parade before it headed back out to Disneyland in Anaheim.

Disney Springs for the Holidays – In November, Disney Springs introduced two new offerings for the holidays: Christmas Tree Trail and the Starbright Holidays – An Intel Collaboration.  The Christmas Tree Trail is located near the area of the old bus depot and features 15 themed decorated trees. The Starbright Holidays – An Intel Collaboration show features 300 illuminated drones that are choreographed to holiday music. The two show a night spectacular takes places over the lagoon at Disney Springs.

Additional Resort Hotels – In a quarterly earnings call in November, Bob Iger announced that they are looking to build additional resort hotels at Walt Disney World in the near future. Destination D at Walt Disney World – In November, Destination D: Amazing Adventures took place at the Contemporary Resort Hotel. In addition to the appearance of James Cameron talking about the upcoming Pandora – The World of AVATAR at Disney’s Hollywood Studios, Bob Chapek, Chairman of Walt Disney Parks and Resorts, said that there would be some “major changes” coming to Epcot and said he told the Imagineers to “dream big.” Also, a new style of MagicBand was introduced. It has a removable puck that can be worn in the MagicBand and in keychain that can be hooked on a number of items including chains and lanyards.

Add-Ons at Walt Disney World – Disney has introduced a number of add-on events, activities and amenities for guests to enhance their visit. November saw the introduction of Tiana’s Riverboat and Ice Cream Social Party. At the Liberty Square Riverboat dock, for $49.00 for adults and $29.00 for children 9 years of age and up, guests can enjoy an ice cream buffet complete with assorted ice creams, toppings, drinks and sweet treats. Afterwards, board the Liberty Square Riverboat and watch the Festival of Fantasy Parade then sail around the Rivers of America with Tiana and Prince Naveen. It’s currently being offered through March 31, 2017.

A very controversial addition has been the cabanas available for rent in Tomorrowland near Space Mountain. Currently in the testing phase, these cabanas, which will accommodate eight persons, rents for $649.00 plus tax per day and includes private and shaded seating, cold beverages, snacks, charging stations, sunscreen, hand sanitizer, insect repellent, a small refrigerator, one fruit basket and a one-time delivery of ice cream novelties and desserts, as well as personalized Mickey ears and reserved viewing for parades and fireworks. Admission to the Magic Kingdom is not included in the price.

“Highway in the Sky Dine Around” ~ a spectacular five-course progressive dinner experience at the three deluxe Disney Resort hotels around the monorail line! The experience will begin at Disney’s Contemporary Resort, where guests will check in at The Wave… of American Flavors restaurant and enjoy an appetizer and specialty cocktail with fellow “Dine Around” guests. After making your way to the Polynesian Village Resort, the Grand Floridian Resort & Spa, dessert and viewing “Wishes” is back at the Contemporary Resort at the California Grill.

Monorail Cast Members Costumes– In December, Cast Members working on the Monorail system received new, updated costumes. Gone are the maroon and white costumes from the last 20 plus years and in are white, blue and yellow costumes. Also, Cast Members will be wearing a conductor’s hat – similar to ones worn by the Railroad crew.

ShareTweetSubscribe
Notice: Undefined offset: 2 in \\172.16.100.80\FS\wwwroot\disneyinfo\wp-content\themes\blankslate\single.php on line 44 Notice: Trying to get property of non-object in \\172.16.100.80\FS\wwwroot\disneyinfo\wp-content\themes\blankslate\single.php on line 44
Save Up to 25% on Rooms at Select Disney Resort Hotels This Summer!