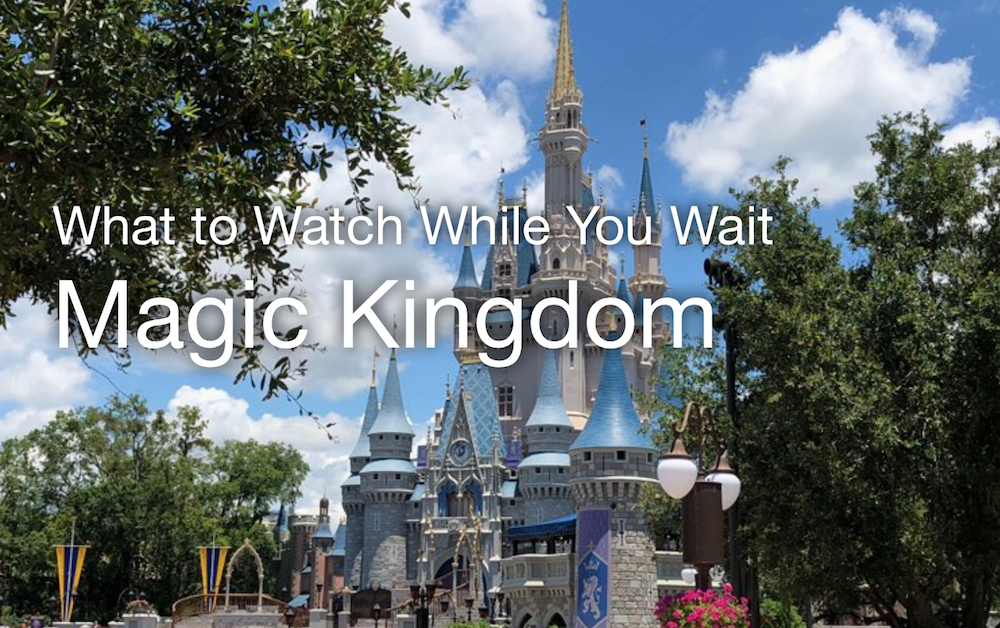 We are in the home stretch now! We’ve looked at what to watch while you wait for your Disney Parks vacation at Disneyland Park, Disneyland California Adventure, Walt Disney World‘s Animal Kingdom, Hollywood Studios and Epcot. Now that we have Disney+, making all of your Disney watching needs easier, let’s conclude the series with the park that started it all on the east coast, Magic Kingdom.

It’s a tale as old as time, and one that recaptured the hearts of Disney fans worldwide with the cinematic live-action masterpiece released in 2017. Though the original animation may be perfect to share with younger family members, don’t miss this extraordinarily elegant do-over with the rest of your family.

Just as the Sleeping Beauty Castle stands (sort-of) tall in the center of Disneyland in California, Cinderella’s castle acts as the magnificent centerpiece of the Magic Kingdom. Cinderella as a character has a much stronger presence in Florida than on the west coast, with one of the most popular character dining experiences within Walt Disney World being Cinderella’s Royal Table. Get your glass slippers ready with a family showing of the original animation, and watch out for those pesky stepsisters that can sometimes make their way around the park.

If you are traveling with a wide variety of ages, heights, or interests, this ride might be one of the few that is perfect for everyone. It has no height restriction, so you can take smaller kids on board, and it isn’t too jerky, so older family members are less likely to become uncomfortable. While the movie franchise might not be suitable for younger family members, the concept of pirate adventure isn’t lost on little ones, even without the backstory.

What is this? Is it an attraction that we don’t have at Disneyland Park? Indeed it is! One of the only substantial nods to this story in the parks, The Magic Carpets of Aladdin is a fun way to start the day. Many of us would take any excuse to sing “A Whole New World” in the car, reliving every other talent show entry from high school like it was yesterday. Check out the old classic or enjoy the new live-action version released in mid-2019.

If you have a Winnie the Pooh lover in your house, this is your time to shine. This attraction is another one that is great for all ages. It’s smooth, calm and easy, and brings a smile to your face. Enjoy a few episodes of Winnie the Pooh to prepare for the ride or just to enjoy the simple life of the Hundred Acre Wood.

Snow White became an integral part of Disney history by being the first of the princesses to make their way from Walt’s paper to our hearts. Even so, in some ways, Snow White is one of the darker tales with the scarier aspects of the story amplified in the Disneyland ride, Snow White’s Scary Adventures. The newer addition to the Magic Kingdom takes a much brighter tone focusing on the happy-go-lucky lives of the seven dwarfs. Be sure to check out the animated original, or a picture book of the Snow White story.

Before my girlfriends were asking if you were a Carrie, Miranda, Charlotte or Samantha, they were asking themselves which Disney princess most embodied their personalities and values; or perhaps it was just who had the prettiest dress. Nonetheless, I always fancied myself an Ariel, which means I still have a soft spot for the voiceless redhead just wanting to go for a walk on the beach. Ariel’s Grotto provides a great place to meet Ariel and spend a few minutes educating her on the traditional names of the various above sea level trinkets you may have with you. Dinglehopper, anyone?

Everyone loves Dumbo, though, as a child of the 80’s, I was one of the many that were traumatized by the concept of Dumbo losing his family. True to most remakes, the 2019 of the live action DUMBO remake takes a few dark turns, making it a bit overwhelming for a younger audience. To gear up for the Storybook Circus portion of Fantasyland, I would check out one of the many beautifully illustrated books of the story, allowing your children to understand the background without the sleepless nights.

This attraction holds the perfect amount of crazy from the Alice in Wonderland storyline without all the parts that make you wonder what sort of substances were influencing the story writers. The animated classic is perfect for families, and will spare you that next-level crazy that can be found in the live action remakes.

The classic tale of Peter Pan comes to life in this beautiful flight above London, Neverland, and beyond. This attraction is sure to add your family to the long list of guests who adore this attraction; willing to line up for over an hour to tick it off the list every single visit. Make sure you familiarize your family with the characters to get the most out of this adventure. It’s the second star to the right and straight on till morning.

With the 2019 release of the fourth Toy Story installment exciting fans everywhere, this is the perfect time to brush up on your Toy Story 1, 2 & 3 knowledge. Even though Toy Story Land has opened at Disney’s Hollywood Studios, you can still enjoy some of the characters in Buzz Lightyear’s Space Ranger Spin.

This seasonal attraction is a little darker than one would expect. If your family isn’t familiar with the darker side of this movie series set in Hawaii, try to prep younger ones for some of the effects that have the potential to scare them during this 15-minute experience.

There are a few additional movies that you can introduce if you still have time. Monsters, Inc. will give you the background to Monsters, Inc. Laugh Floor in Tomorrowland, and you could even use Rapunzel’s Tower in Fantasyland as an excuse to put Tangled back into your dusty DVD player. But overall, the stories above will keep you busy for many hours while you wait for that much anticipated Walt Disney World Magic Kingdom vacation.

That’s a wrap, everyone. Thanks for reading along.